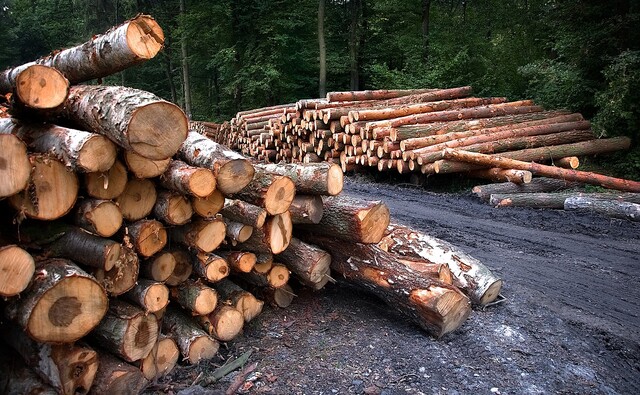 Wood manufacturers in B .C. with little or no Crown holdings will gain greater access to logs through BC Timber Sales.

BC Forestry Minister Bruce Ralston announced a new program Tuesday, the BC Timber Sales (BCTS) Value-Added Manufacturing Program, which will reserve 10% of BC Timber sales for qualifying businesses.

It will not be open to conventional timber producers. Only manufacturers with the highest added value will qualify. That includes veneer and plywood, engineered wood products, shake and shingles, log home fabrication, decking and flooring.

The announcement was made Tuesday at Coastland Industries Ltd., which makes veneer in Nanaimo and has a veneer drying facility on Annacis Island.

The veneer is made of thin layers of wood detached from the logs and glued to the center panels. Plywood is one of the products made from veneer.

In addition to veneers, the company also sells peeled cores to niche markets for things like fence posts, vineyard and orchard stakes. The company employs 280 people.

The company is not proprietary, making it one of the companies that will qualify for exclusive access to logs through BC Timber sales.

BC is facing a long-term decline in its annual allowable cut (AAC), due in large part to a massive mountain pine beetle infestation that began in the late 1990s. The decline in AAC has resulted in a series of closures of sawmills and pulp and paper mills in the last two years.

Ralston reiterated an oft-heard refrain that BC’s forest industries must do “more with less.”

“Our government’s vision for forestry is to build a stronger, more resilient industry through value-added manufacturing,” Ralston said. “The reality is that we need to do more with less, and that means making more innovative wood products right here in British Columbia and creating more jobs with every tree harvested.”

Ralston noted that five large forestry companies in BC own 50% of the Crown holding.

“It makes it difficult for new, innovative, value-added companies to enter the market,” Ralston said.

Ralston said the new program will start with 10% of BC Timber Sales, but is expected to eventually expand.

“There is going to be significant investment in high-value lumber manufacturing over the next decade around the world,” said Jake Power, president of PowerWood, which makes custom cedar products.

“Construction is all the rage around these greener alternatives. I believe in BC that change can happen here.”